As a teenager, Jordan Boesch was a “sandwich artist” at a popular quick-service restaurant, an experience in a family business that eventually spun itself out as 7shifts, a North America-wide company he founded in 2014.

“My dad ran Quiznos locations, and I worked for him. I understood early the pains of managing and running restaurants firsthand,” Boesch says.

At its most basic, 7shifts is a labour management and communications platform with a mobile app for restaurateurs which provides tools for controlling labour costs and scheduling staff, among other functions.

Save time and money at your restaurant

Those experiences inspired 7shifts and its on-boarding platform with a support team and live-chat link which can help restaurants get started with the program and use its full capacity and value. “We’re self-serve and simplified. Along with the machine learning, we have differentiated ourselves in the scheduling and labour management market,” Boesch says.

While 7shifts is not a revenue-driver for restaurants, it saves them considerable time and money, according to Boesch. He notes that saving $10 is the same as making $10, so restaurateurs shouldn’t only be in revenue mode. “The platform gives managers a chance to see if they are going to go over or be under those labour and budget targets in real time,” Boesch says adding that the system assists with forecasting sales and predicting costs.

On the other hand, it also helps employees communicate with managers and provide shift feedback too.

“If I had to bundle it all together, I would say that we’re not only a platform for managers but also for employees to help them be more engaged with their work place.”

The family business was the crucible: Boesch saw up close the chaos that is the typical hourly-worker scheduling process. “There were always a lot of sticky notes and papers everywhere, and hand-written notes about shift-trading and when people could or could not work. It got me thinking about improving the situation.”

Starting with a small program that uploaded an Excel schedule to a website so employees could download it, 7shifts evolved over time to where it is today.

Saskatchewan-based and primarily serving North American restaurants, the company operates in 20-plus countries and over 7,000 restaurants—everything from single- and multi-unit independents to large corporate franchises.

“We can tailor our software precisely to a restaurant’s needs. We’re mostly used by independent restaurants and growing franchises,” says Boesch. They charge from free (basic platform functionality for restaurants with 10 or fewer people) to $150 per month at their premium offering.

Labour management is a central focus of 7shifts, and Boesch stresses it’s not a matter of just scheduling more people; it’s a matter of scheduling the right number of people at the right time.

“We draw on historical sales data from a Point of Sale (POS), and we look at weather patterns and seasonality. We look at all these variables that could influence how much labour you would need to service the demands of your restaurant at a particular time. We build that out for the restaurant, and they can make adjustments as needed depending on the insights.”

Behind the scenes, machine learning—the algorithms and models used by computer systems which continuously improve their performance over time—takes place, as it does in most of today’s technologies. The company draws on their own in-house machine learning team and data science team, which optimizes for the various efficiencies as they relate to weather and seasonality, but also the skill level of staff members.

Boesch points out that that one result is good for employees and for the business in that it can match shifts with people who work well together, as well as account for availability and vacations. “From this, we’ve gained a lot of traction and adoption in the industry because it means managers work less on scheduling and more on working with staff and driving sales for the restaurant.”

“If $5,000 worth of meat disappeared from your fridge, you’d probably be checking cameras, yet operators have become almost complacent and see high turnover as normal.”

At the same time, the platform helps managers better manage the “employee life-cycle” in the restaurant – hiring, training, scheduling and retaining. Employee turnover in restaurants is the highest of any private industry in North America, according to Boesch, and it has continued ramifications for restaurants.

“Restaurants are now starting to look more closely at turnover rate and its costs from a macro-level. It’s quite expensive, ranging from $3,000 to $5,000 when you lose an employee and upwards of $20,000 when you lose a manager,” he notes. “If $5,000 worth of meat disappeared from your fridge, you’d probably be checking cameras, yet operators have become almost complacent and see high turnover as normal.”

Boesch says that 7shifts saves between one and four percent on overall labour costs as a percentage of sales: a restaurant doing $1 million in sales will save between $10,000 and $40,000 annually.

“The ROI for 7shifts is substantial in just being able to help operators schedule better,” he says, adding that some of that is saved by preventing early clock-ins that quickly add up.

The platform can also reduce the time spent scheduling by 80 percent.

“It takes some of the work out of the manager’s hands and gives employees the responsibility of determining the shifts they can work. The manager is involved only when approval is needed.” 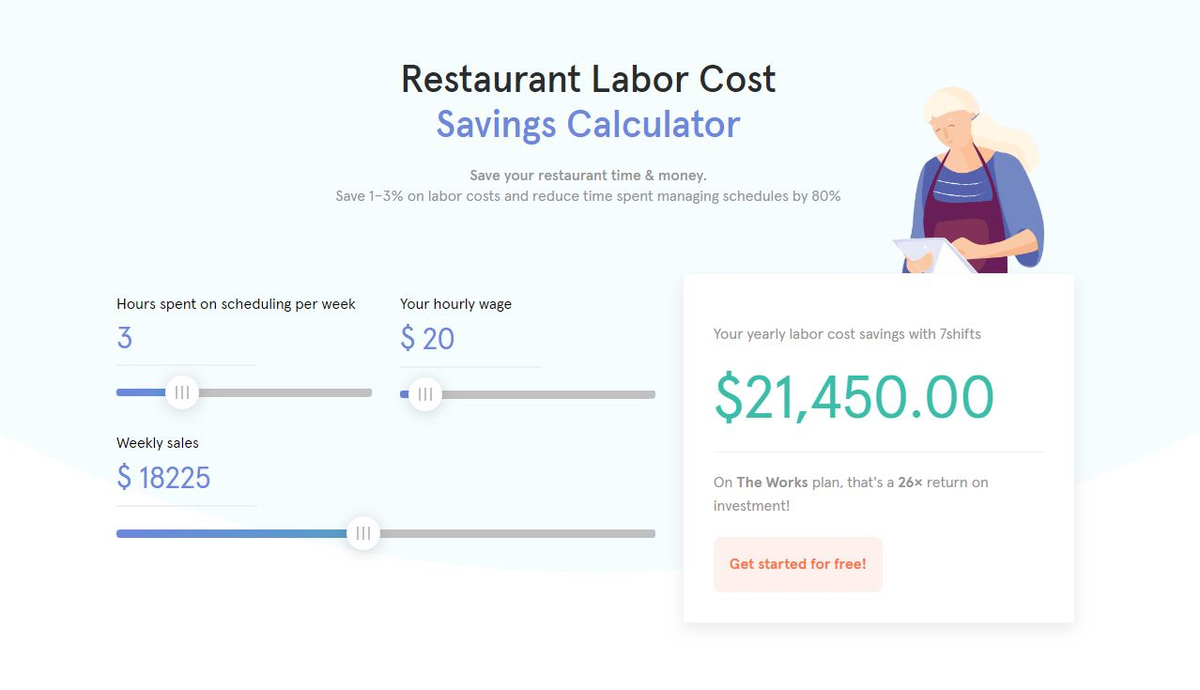 7shifts can also assist management with labour regulations and compliance where they apply.

For instance, regulations in some areas stipulate that scheduled employees who report to work only to find they have been given fewer than three hours, must be paid three hours at their regular rate of pay.

The “7punches” time-clocking system makes it easy for managers to reconcile the time worked with payroll requirements. The platform runs a report for hours worked, then notes all results showing fewer than three hours. This can then be manually adjusted in payroll to reflect the appropriate payout.

Is 7shifts itself a shift in approach that restaurants should consider? Boesch thinks so.

“It’s becoming more common that restaurateurs are using technology. It has largely been an industry that’s slow to adopt technology, but that’s also meant that there is a lot of technology companies with a lot to offer the industry,” he says. Boesch sees that trend continuing as a younger demographic of restaurateurs and food-business operators enter the industry. “Cloud-based technology is where they are going to look first. It’s an exciting trend, and I think it is going to grow.”

As we roll into a new year, Boesch says it’s a good time to think strategically about the next 12 months.

“Think about how you engage staff and manage your labour. Doing things the same way could mean leaving dollars on the table.”

Learn more about 7shifts at 7shifts.com.

Added to your cart: